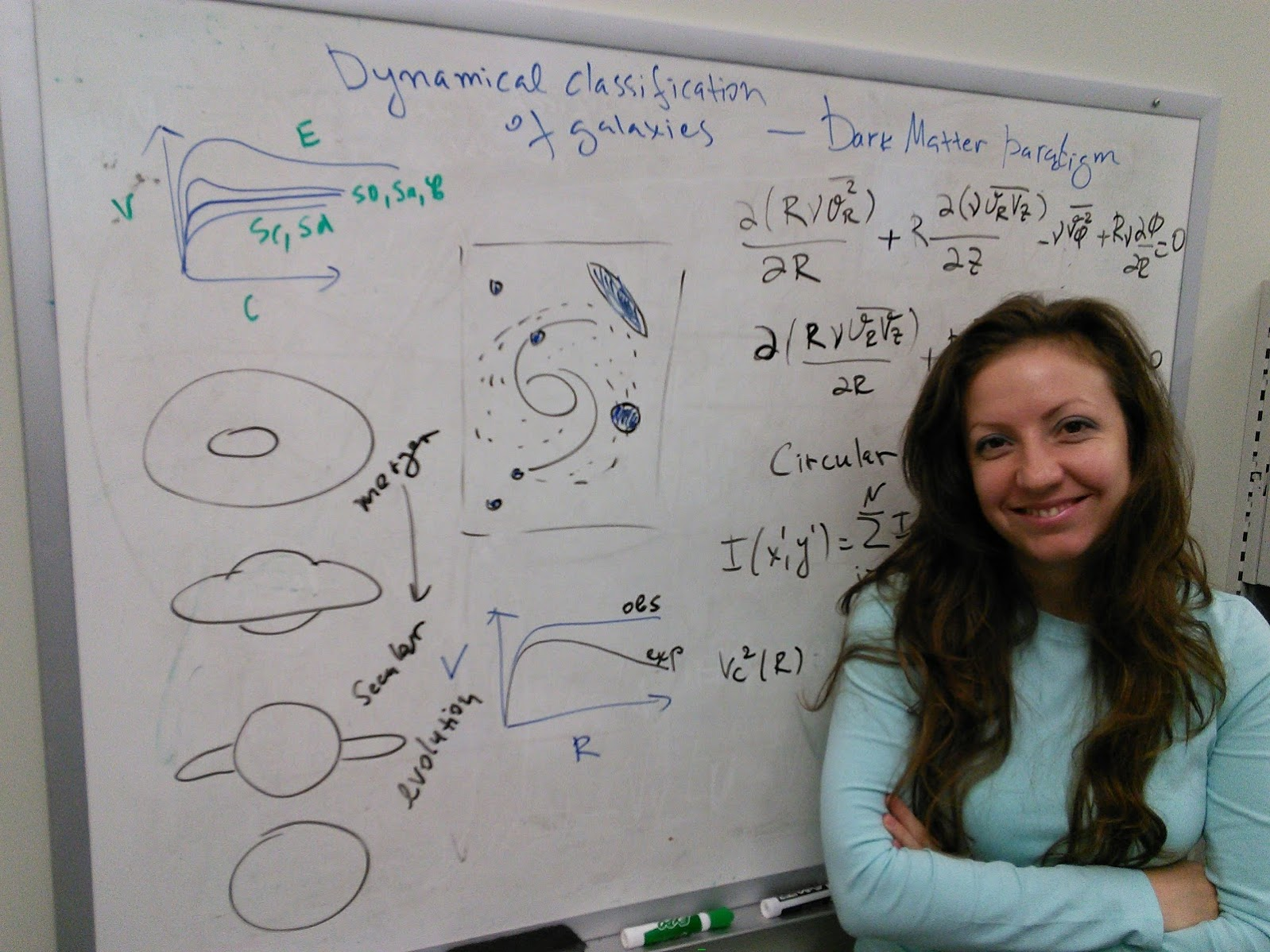 Welcome to my website! My name is Veselina Kalinova and I am a postdoctoral researcher at the Max Planck Institute for Radio Astronomy, Bonn (Germany) since 2015. I am currently working on the exploration of the influence of galaxy dynamics on the star formation quenching of the nearby galaxies.

Previously, I was an Avadh Bhatia Postdoctoral Research Fellow at Alberta University, Edmonton (Canada) in the the period 2014-2015. I obtained my PhD degree in April 2014 at the Max Planck Institute for Astronomy, Heidelberg (Germany) on the topic "Mass Distribution of Galaxies from SAURON and CALIFA Stellar Kinematic Maps". Earlier, I graduated as Master of Science in Astrophysics in 2010 and Bachelor of Science in Physics in 2009 at Sofia University (Bulgaria).

Quenching stages and nuclear activity of nearby galaxies 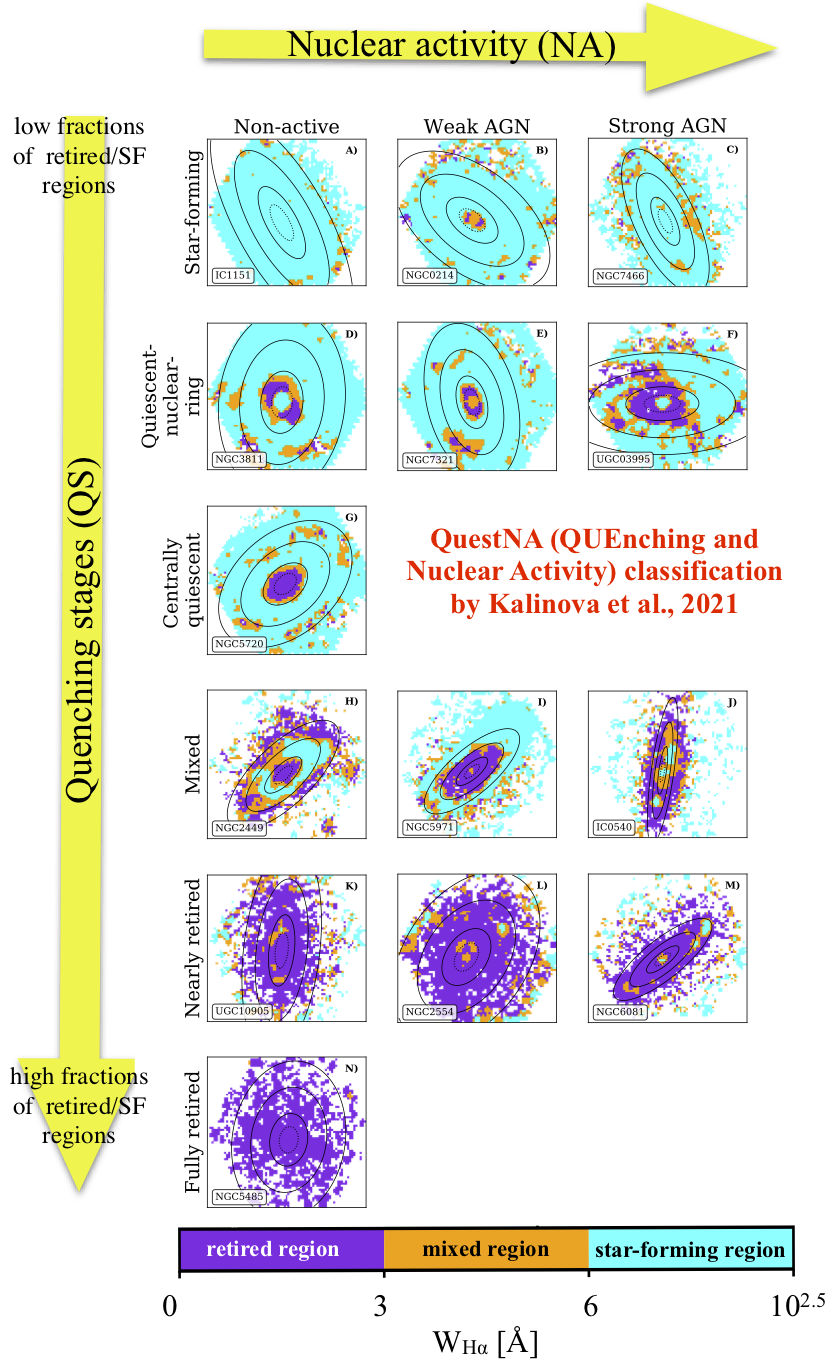 In my recent paper (Kalinova et al., 2021, A&A, 648, A64), we develope a 2D emission-line classification "QuestNA" taking into account both star formation quenching stages of the galaxies and their nuclear activity. The rows of QuestNA classification represents the quenching stages (star-forming, quiescent-nuclear-ring, centrally quiescent, mixed, nearly retired, and fully retired), which represent different snapshots of galaxy evolution. The ‘retired/star-forming regions’ ratio of the galaxy incresases from star-forming to fully retired galaxies (from the top to bottom). The columns of the proposed classification reflect the level of galaxy nuclear activity per quenching stage: non-active, weak, and strong AGN (from left to right). It is interesting to further explore whether QuestNA classification can be considerred as an evolutionary diagram from star-forming to retired classes or at least whether there is an geneological connection between the different stages. 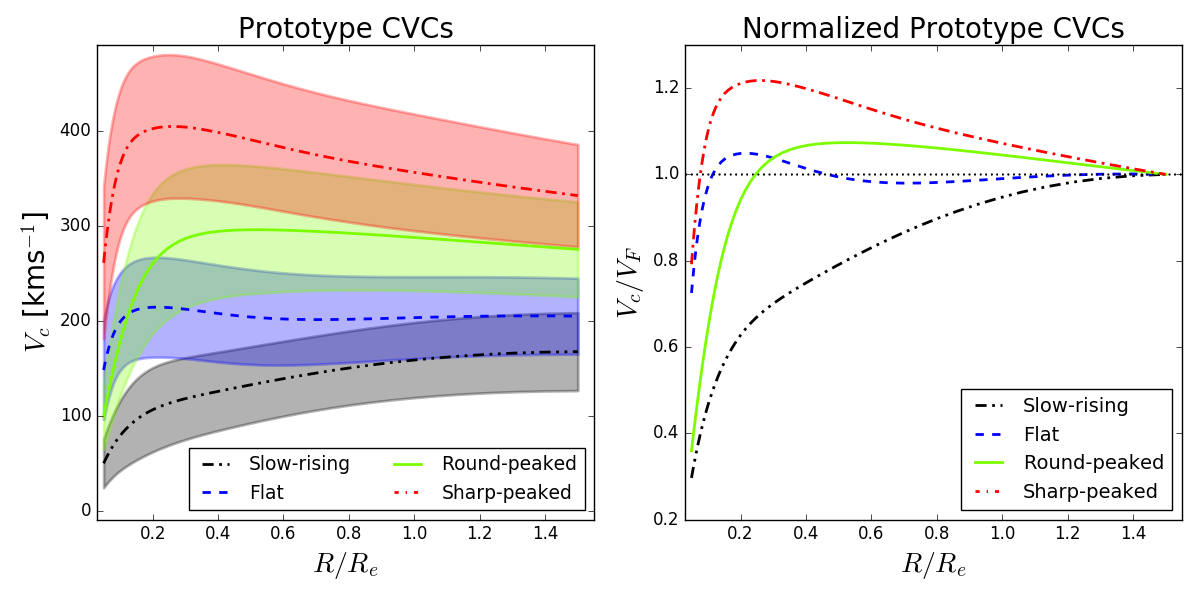 The total circular velocity curve (CVC) of galaxies includes the gravitational potential of stars, gas, and dark matter. Therefore, CVC is one of the main tools for studying galaxy structure and tracing the fossil records of the galaxies of their past. In addition, in Kalinova et al. 2017b, we find that the CVCs of the galaxies trace the evolutionary stages of these systems. Galaxies that have slowly increasing CVCs are characteristic for young, low-mass, low-metal, high-dark-matter-content galaxies. While those with steep (sharp-peaked) curves are typical for old, high-mass, high-metal and relatively less-dark-matter-content galaxies. Flat and Round-peaked classes appear presented by galaxies with intermediate mass, age, luminosity, metallicity, bulge-to-disc ratio, morphologies and dark mater fractions. We analyse the CVCs from the de-projected surface brightness of the galaxies, after scaling by a constant mass-to-light ratio based on stellar dynamics (solving axisymmetric Jeans equations via fitting the second velocity moment of the stellar kinematics) from CALIFA survey using 238 galaxies. We further apply Principal component analysis (PCA) to the CVC shapes and amplitudes to find characteristic features and use a k-means classifier to separate the circular curves into described above classes. 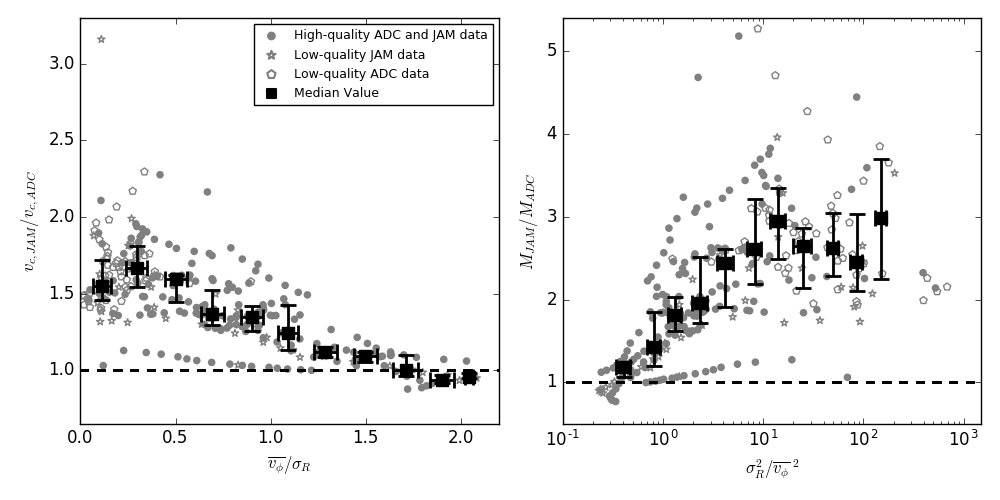 In Kalinova et al., 2017a, we examine the central mass distributions of 18 late-type spiral galaxies using two different dynamical modelling approaches - the asymmetric drift correction (ADC) that adopts a thin disc approximation and axisymmetric Jeans Anisotropic Multi-Gaussian expansion (JAM) model that does a full line-of-sight velocity integration. We use stellar kinematics maps obtained with the integral-field spectrograph SAURON to derive the corresponding circular velocity curves from the two models. To find their best-fitting values, we apply the Markov Chain Monte Carlo (MCMC) method. ADC and JAM modelling approaches are consistent within 5 per cent uncertainty when the ordered motions are significant comparable to the random motions, otherwise if their ratio is lower than 1.5 times, ADC underestimates the calculated mass of the galaxies and invalidates the thin disc assumption. Since the stellar masses of the galaxies in our sample are not confined to their disc planes, it is likely that they have a non-negligible contribution from their bulges and thick discs.

VLA-uGMRT-CALIFA survey
On-going HI follow-up of CALIFA survey of 72+ galaxies (PI: V. Kalinova, D. Colombo) for exploration of the neutral gas content and dark matter problem in the nearby galaxies. APEX-CALIFA survey
Ongoing CO single-dish survey of 500+ galaxies (PI: D. Colombo) for studying the star formation quenching processes in the nearby galaxies (through integrated properties within one effective radius) from the Main Sequence of Star Formation to the Red sequence. 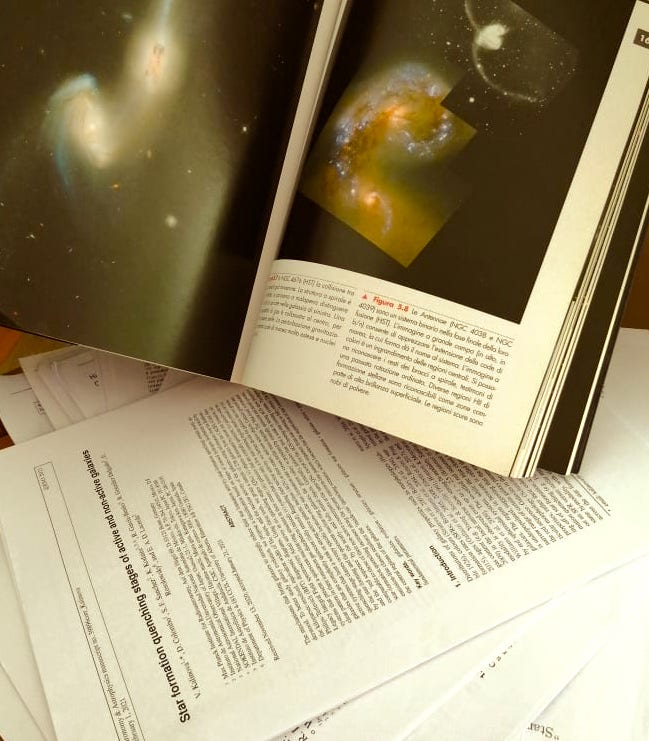 Teaching: Two lectures with supportive materials and videos on Regression (Lecture 5) and Principal Component Analysis (Lecture 2) as part of the Black Board Lectures of the Year 2017 at MPIfR for PhD students and scientists - "Machine Learning: The elegant way to extract information from data"

Outreach: 8 single author publications (between 2005 and 2010 year) in the Bulgarian outreach monthly magazine for astronomy "Andromeda" and bi-weekly newspaper "Telescope" of the Astronomical Association Sofia (AAS)